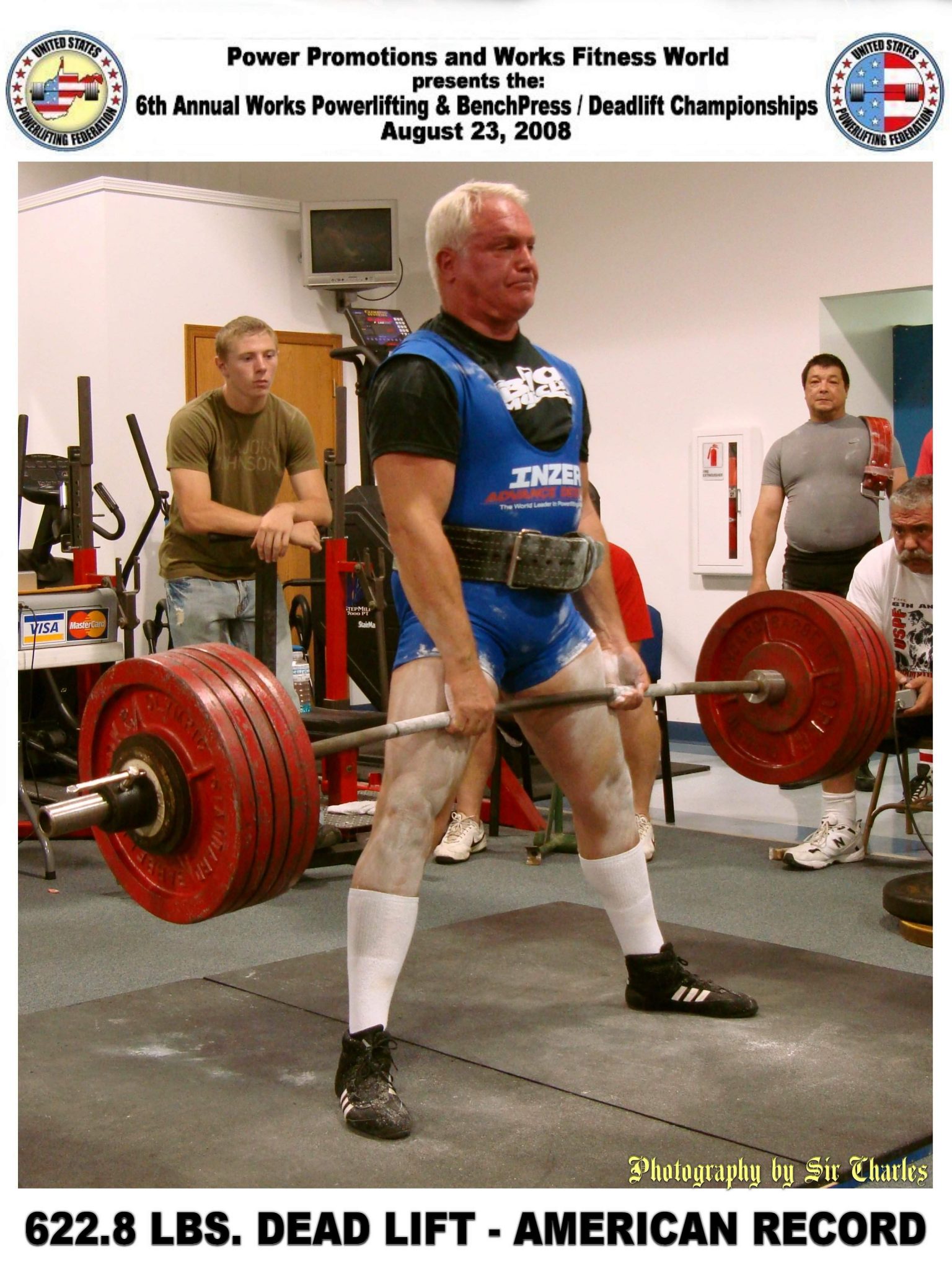 On the weightlifting platform, your physical strength has to be multiplied by your intellectual abilities and ambitions.For Anatoly Pisarenko  Barbell training is both a passion and a discipline. A world of physical complexity underlies the constructive ardor of heavy squatting, pressing, and deadlifting. As one advances in barbell training, respect for that complexity becomes increasingly important. No lift embodies this combination of intensity and complexity like the deadlift.

Legendary powerlifter,  Ed Coan,  remarks in his video on the deadlift: “The deadlift is the number one technique lift. If you don’t have technique in the deadlift, you just can’t muscle it up” .  Ed Coan’s attribution of technical primacy to the deadlift might be surprising. There seems to be an attitude among some lifters that deadlifting is basically just about attitude and the least technical of lifts. It’s true that all of the technical perfection in the world means nothing if someone lacks the volition to break a maximal weight off the floor and force it to lockout. However, all of the intensity in the world won’t surmount lousy technique with a truly maximal weight.

By “truly maximal,” here’s what I mean. Let’s say a guy grinds out a deadlift in a manner nothing short of repugnant—lower back extremely rounded, bar over the toes at the start, bar jerked up with no leg drive. I submit that was not a maximal weight. It was a submaximal weight made maximal in effort due to severe inefficiencies.

Consider if you loaded a bar to 85 percent of your best deadlift. Rather than deadlift it properly, do it like the aforementioned fool. I’m guessing the weight would feel less like 85 percent and more like 95 percent or higher. What this means is that bad technique amounts to increasing the weight on the bar. When the weight is 100 percent and the inefficiencies are severe, the results will be failure and often injury.

Utter technical repugnance usually isn’t the problem with powerlifters. We tend to miss deadlifts due to comparatively small but pernicious errors that kill third attempts. With conventional deadlifters, it’s usually starting with the bar forward of the middle of the foot, which places the shoulder blades behind the bar. This produces a gruesome cluster of inefficiencies.

As Mark Rippetoe and Lon Kilgore analyze in Starting Strength: Basic Barbell Training  and video data confirm, on a heavy deadlift, the bar isn’t going up until it’s over mid-foot and aligned with the shoulder blades. Being compelled into this equilibrium wastes precious energy and endangers the body versus starting in that equilibrium. Coan makes a similar point in his deadlift video involving one’s center of gravity. Dave Tate has remarked, “The stronger you get, the more important technique becomes, and one inch can make the biggest difference in the world” . An easy way to think of the bar-to-foot relationship is to see where the bar is at lockout in relation to the foot. Given that the bar is over the middle of the foot at lockout, why not start there? Why add a horizontal component to a vertical lift? I recently facilitated a 50-lb PR in a couple of minutes with this explanation.

Excessive knee bend causes several problems, most apparently with hip position. Tate notes, “…look at your hip position at the start of the lift when you pull and watch how much your hips move up before the weight begins to break the floor. This is wasted movement and does nothing except wear you out before the pull” .  Powerlifter  Rick Walker makes another key point: “When I would sumo deadlift, I was always trying to keep my back perfectly upright, which in turn, caused me to sink my hips very low. Now I’m five feet nine inches, but I have a “wing span” of 74 inches. It was ridiculous for me to sink my hips so low when I had that much of an advantage with arm height.”

Moreover, when the hips are too low at the start, this causes the shoulder blades to move behind the bar and often moves the bar forward of mid-foot if the shins bump the bar (more likely with conventional deadlifters).  Coan himself started with quite low hips on his heavy deadlifts (not on initial warm ups though). When the bar actually left the floor, his hips were considerably higher with a different torso position than at the start.

A Bench presser with short “alligator” arms runs into a less comfortable situation when the bar hits the floor. He has no choice but to get low to reach the bar, his hip depth approximating a full squat in the start position. Why would a person with more advantageous arm length do this? The benefit of keeping the arms as “long” as possible is more obvious when they’re artificially shortened in a deficit deadlift variation like the snatch-grip deadlift. The snatch-grip deadlift can be an excellent assistance exercise, but it’s not meant to be done in a meet.

How does one prevent excessive knee bend and maximize arm length? → Get into your Deadlift stance → Lean over and bend your knees as much as it takes to grip the bar  → Now squeeze up your chest hard, and you’re all set.

This is the set up of Andrey Belyaev, perhaps the most impressive powerlifter of our era:

When Ismo Lappi deadlifted a world record 749 lbs in the 165-lb weight class in 2001, he similarly maximized his arm length:

In this case,  Lappi takes in his air and sets his back before descending. He bends his knees as much as it takes to grip the bar and then starts the lift. Note how high Lappi’s hips are at 17 seconds at the start.

For a variation of this style involving a pre-stretch of the hamstrings, see six time IPF world champion, Viktor Furazhkin

These elite lifters share some fundamental characteristics at the start of their deadlifts—hips high, arm length maximized, shins very close to the bar, and torsos not vertical. This network of efficiency prevents wasted movement and enables the display of amazing strength.
“There are a lot of strong people who aren’t as effective as they should be,” Mark Rippetoe once told me. We were discussing people who train intensely but foolishly, suppressing their full potential. Sometimes that potential can be liberated through an inch of foot movement and a few degrees less knee movement. Sometimes an inch and a few degrees is the difference between failure and a PR.

Sumo set up………. approach the bar………..take one foot or the other….your choice as to which is most comfortable and depending on whether you are a wide sumo or a narrow sumo…………..the shin goes up to the bar…..toes tilted out 45 degrees or even more in some cases………..shins vertical…knees slightly bent……..hands down inside the legs with the forearms touching the inside of the thigh if possible……….as you push your knees out (like the squat)……you bend over slightly….arms straight….and grasp the bar half on and half off the knurling……….arms should be straight vertically from the shoulders to the bar..this will determine exactly where the hands are to be placed………for a very big lifter with wider shoulders this may be all the way on the knurling……but for most; half off and half on will insure the best and shortest pull………..THE ARMS ARE STRAIGHT……..AND THE BAR LIES IN THE FINGERS, LIKE IT IS HOLDING A HOOK……THUMB OVERLAPPING ONE OR TWO OF THE FIRST TWO FINGERS…….the bar should “not” be squeezed……it should just lay in the fingers/hand..only the thumb should be flexed….or squeezed……not the hands…not the forearm…….if this is done incorrectly most likely the bar on a very hard pull will slip out of the hands………also if the hands are rotated as you grip the bar..it will most likely slip out as the weight pulls down and pulls the rotated hands back to a straight up and down position……one does not have to have a strong grip to hold onto large amounts of weight…….i have a very poor grip and grip strength and have never lost a deadlift……i.e 716 at 165lbs……… as you are leaning over the bar knees pushed out…..you dip the hips slightly to start your pull……short and sweet………the hips will pull in towards the bar……the head will follow from down to out as you start the pull…..you will pull the slack first out from the plate/bar…then the bend in the bar slack will come next…………the bar will pull into the fingers even more as this slack is pulled out and as all the different areas of slack are pulled out you will explode…….up…….with a very short in line stroke…………the back will not be arched but have a slight curve in it/or perhaps even straight………you should take a short half breath right as you go down to the bar……….too much breath expands the chest and rib cage more than it need be……..raises the shoulders and lengthens the distance the bar travels…as well as forces the shoulders back while at the bottom……right before the pull……… a variation of the slow sumo pull is the drop and grab and explode method……everything is still the same as far as the hands………but it is done very quickly……..many times, when done to quickly or out of control, one grabs the bar wrong and/or the hips rise to fast…giving way to a stiff legged deadlift…… conventional stance……… walk to the bar…..feet about shoulder width…….the shins should be 2-4 inches from it……..some minute experimentation will find the exact spot you need to be……..as you lean over to the bar…grab it the same way as you did in the sumo except outside the legs a few inches on the knurling……..touching the calves….small breath and dip the hips and pull……..one variation of this used, nowdays is to dip…roll the bar a few inches out in front of you and then reverse and pull it back in;…as it gets to the shins start the pull upward……some momentum can be obtained from this and the bar can be started in closer to the center of gravity…but if not done exactly right a moving bar can be a problem….. form…style….and technique……is more important than the routine…….we know this to be true in every sport and so it is in powerlifitng………we need to concentrate more on it…and spend hours on it…consistently……..every week……..throughout your whole career………….a baseball player takes thousands of swings…..a week……..so a lifter should do many…many reps with little or no weight to perfect his form….style and technique…….rdc