The Healthy Eater’s Guide to Rice

Everything You Need to Know

White or brown rice? How can you reduce the calories? What about arsenic? Best way to cook it? Here’s how to make rice a truly healthy food.

You’ve probably experienced it. You go out to a sushi restaurant with a bunch of friends and the chef comes over to take everyone’s order. Then one member of your party, probably “Zinnia” or something – who invariably smells of patchouli and who braids and beads her armpit hair and is always waxing nostalgic over the Lilith Fair concerts – asks that her spicy tuna cut roll be made with brown rice instead of white.

She says it nice enough, but you can detect a tiny bit of snobbery in her dietary request, and you can sense that the chef briefly thinks about sprinkling a little poisonous Fugu into her cut roll, but he doesn’t really do that kind of stuff – at least not since he retired from the Yakuza. No doubt about it, Zinnia thinks the rest of you are nutritional cavemen, not fit to carry her recyclable Whole Foods canvas tote.

But Zinnia is wrong. There’s nothing nutritionally wrong with white rice and, in fact, it’s much better, health-wise than brown, especially when you buy certain types and prepare it a certain way.

Before we get to types and preparation, though, let’s dispose of this brown-rice superiority myth.

Brown rice is absorbed much more slowly (because of the fiber) and, as such, doesn’t cause as much of an insulin release. A recently released study out of the Brigham and Women’s Hospital in Boston documented 10,507 cases of type 2 diabetes and concluded that people who ate a lot of white rice (5 servings a week) had a 17% higher risk of getting the disease than those who only ate it once a week.

Maybe, but I’d love to see how these women ate their rice. The thing is, hardly anybody eats white rice by itself… unless maybe they’re on the Bataan Death March and it’s all they’ve been given by their cruel captors. Instead, they eat their rice with meat, vegetables, and oils or fats that slow the digestion rate of the rice and thus lead to smaller and more sustained releases of insulin.

Regardless, you can reduce the glycemic index of white rice by making it more “resistant” (slower to digest). According to the work of Sudhair Hames and Dr. Pushparajah Thavarajah (2015), preparing white rice the following way bridges two polysaccharides (amylose and amylopectin) together, making them indigestible and thereby reducing the calories in rice by up to 60%:

What the judges say: We’ll call this round a draw, even though I think the whole GI thing is overblown when it comes to rice (since, as mentioned, it’s usually mixed with other foods when eaten, thereby lowering the insulin response in general).

Unfortunately, rice tends to absorb arsenic more readily than other plants. But here’s where we need to make a distinction. There are two types of arsenic: organic and inorganic. Be aware, though, that in this case, “organic” doesn’t mean it was raised on a farm without chemicals and allowed to run free with the wind blowing through its chemical tresses. Instead, it refers to molecules that have a framework of carbon atoms.

Organic arsenic is also harmless. Inorganic arsenic, on the other hand, doesn’t contain carbon, but it is highly toxic. The latter is the kind we routinely dump into the environment via pesticides and poultry fertilizer, and regular exposure to it can cause bladder, lung, and skin cancer. It’s also the kind that rice sops up while it’s growing in flooded fields.

Back in 2012, Consumer Reports tested a great number of rice and rice-containing products for inorganic arsenic. All types of rice (except sushi and quick cooking) from Arkansas, Louisiana, or Texas had the highest levels of inorganic arsenic, while rice from California had 38% less inorganic arsenic than rice from other parts of the country.

Similarly, white basmati rice from India and Pakistan had less than half the inorganic arsenic of most other types.

But here’s where brown rice gets a trouncing: The researchers found that brown rice had 80% more inorganic arsenic on average than white rice of the same type.

It’s still smart to take some precautions regarding arsenic, though, regardless of which type you’re preparing. At the very least, rinse every cup of rice with about 6 cups of water before you prepare it.

If you really want to be smart about it, though, “parboil” your rice. This method involves the following steps:

This method will remove about 73 percent of the inorganic arsenic in the rice (Menon, et al., 2020) while retaining most of its minerals.

What the judges say: White rice wins this round decisively.

If you were to run a chemical analysis of both white rice and brown rice, you’d indeed find that brown rice was superior, that it contained more thiamine, magnesium, riboflavin, folate, manganese, iron, and zinc than white rice.

Brown rice still comes out ahead in B vitamins, but that doesn’t matter because most white rice, after processing, is fortified with many of the same vitamins they were robbed of when their brown hull was removed.

What the judges say: We’ll score this round even.

When they make white rice, they rip off the bran (the outer coating of the kernel) and that’s the part that contains all the fiber. Everybody knows that.

And yes, I’ll readily concede that fiber 1 is muy important. For one thing, fiber intake is linearly related to the telomere length of leukocytes (Tucker, et al. 2018), and adults that had higher fiber intake had longer telomeres than their counterparts, suggesting less biologic aging.

So, eating fibrous brown rice makes you live longer? Tell that to the white rice-eating residents of Mr. Miyagi’s beloved Okinawa, a “Blue Zone” where residents routinely live to a 100 or more. Besides all that, fiber conveys a host of other benefits, including lowering cholesterol, nurturing gut health, and ensuring seismic bowel movements.

But if you’re worried about the lack of fiber in white rice, hell, throw a sprig of asparagus on top of your mound of rice. It’s all relative, anyhow, as a half-cup of brown rice has less than 2 grams of fiber while a medium-sized apple contains more than twice that.

What the judges say: This round goes to brown, but it’s a split decision, at best.

The scoring in Olympic boxing differs a bit from professional boxing in that the former scores each round on criteria such as the number of punches landed on target areas, while the latter often takes into consideration other factors, like who actually looks like they won the fight, i.e., whose face less resembles raw hamburger meat?

If this brown rice vs. white rice match were being scored by Olympic rules, white rice would have won by the slightest of margins. However, in a real-world contest, white rice has given brown a subdural hematoma which, in boxing parlance, means he knocked the palooka into the middle of next week.

There’s a new contender rising through the rice ranks, though, and it’s got brown rice and maybe some types of white rice thinking they should retire to do commentary. 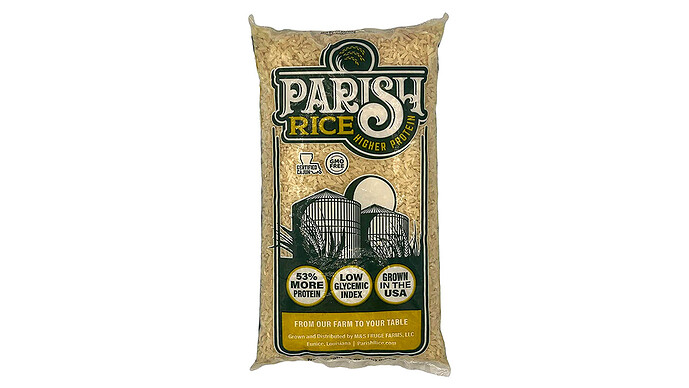 Frontiére Rice – The New Kid On The Block

A group of researchers at the LSU AgCenter Rice Research Station in Cowley, Louisiana, were no doubt scooping out some jambalaya, gumbo, and/or etouffee, when one of them held a spoonful out in front of them, marveled at the light of the bayou sunset bouncing off the grains, and thought to themselves, “How we make this shit better, mon cher?”

I don’t know exactly how they did it, but they figured it out. They came up with a low-glycemic rice that has more than double the protein of regular white rice.

Their “Frontiére” rice, sold under the name of “Parish Rice,” has a GI that has an average rating of 41, which places it under the “low” GI group. Each half-cup serving also has 5 grams of protein, compared to the 1 or 2 grams found in most other varieties. And, for people who care about such things, it’s also non-GMO.

I ordered a couple of two-pound bags and found them to be as tasty (or bland, depending on your taste buds’ opinion of white rice in general) as any other variety I’ve sampled. You can either order direct from the company, from Amazon  or pick some up from Whole Foods.

The only drawback I can see is that it’s grown in Louisiana, where, according to Consumer Reports, rice harbors more arsenic than rice grown in some other locales. However, you can easily remedy that by using the parboiling method I described above. 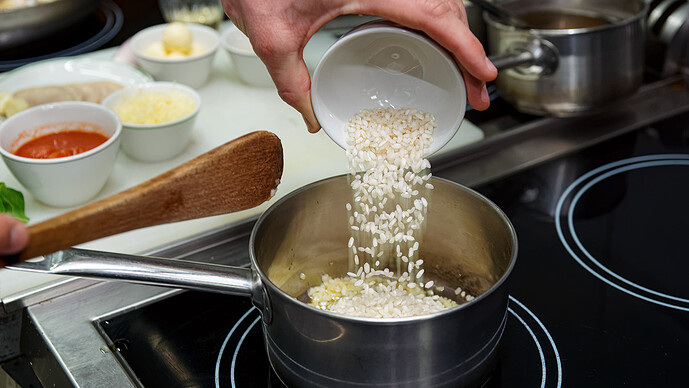 How to Cook Rice

I’ve tossed a lot of rice knowledge at you. It’s like you’re walking down the steps of the church after you just got married and I’m pelting you with it and your face is stinging and you’re ruing the day you ever invited me.

Let me try to restrict the amount I’ve been tossing to one fistful. Here are my rice recommendations to make it a healthier and more body-conscious food choice:

If possible, and if you don’t find it too expensive (at least in comparison to other, less-evolved rice), buy the Parish Rice 117 brand.

Once a week, parboil an amount sufficient to last you through the week.

Optional: Just prior to step 5, add one teaspoon of coconut oil per cup of rice to further reduce the GI, although it probably isn’t necessary unless you’re using a type of rice other than Parish Rice.

Storing it in the fridge for more than two days might dry out your finished product, but it’s easy to reconstitute it. Just sprinkle it with a bit of water and toss it in the microwave.

I get it if this is all too much trouble. An alternative is to buy a cheap rice cooker from Amazon and just rinse the rice with the 6 to 1 cups of water to cups of rice ratio I described earlier and make a serving or two whenever you get the urge.

Why Rice In The First Place?

I eat a lot of white rice. I have it almost every day for lunch, mixed with either a can of tuna or a can of salmon or whatever slab of meat was left over from last night’s dinner (where rice was also likely part of the meal).

It’s not only one of the most easily digestible foods, but also the perfect “nutrient vehicle,” a nutrient Uber, if you will. It’s well suited to mixing with hunks of chicken, beef, pork, or fish, as well as a multitude of vegetables and sauces.