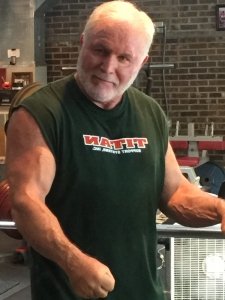 This Blog entry will contain a series of constantly updated articles and information relating to the Senior Athlete (Above 50).Sarcopenia is the degenerative loss of skeletal muscle mass, quality, and strength associated with aging. This should  be a real issue that concerns the well being and effectiveness of all Seniors, regardless of activity levels.  I am 73 and can attest that as a lifelong Athlete, the loss of muscle can have staggering consequences. After some down time from Pulmonary Embolism and a Heart Attack between 2016 and 2018 I was shocked to find out how weak I had become and the effects that weakness had on my daily life. I also looked puny…not great for the self esteem. In November of 2018 I decided to put the “Hammer Down” and resume my exercise routine and get real serious about Nutrition. As an accomplished Powerlifter-Runner- Skier and Swimmer,  I knew what to do about Muscle Building and whole body conditioning, but felt I was lacking in my understanding of the peculiarities of staying in shape as a Senior. Most of this ignorance resulted from a lack of understanding of the basic physiology/science of aging. I credit  Leonard Guarente and Dr. David Sinclair, both products of Harvard/MIT, for waking me up to the complexities of aging, and possible solutions. Each of the additions to this blog will be a bit heavy on the Science side, but if you really want to understand your bodily functions, a little science is necessary.

Leucine is one of the branched chain amino acids, sometimes referred to as the main BCAA. It is the most potent inducer of muscle protein synthesis on a molecular level, and is ketogenic (produced ketones when metabolized)

Leucine is metabolized into one of several metabolites which may contribute to the effects of leucine. Of these, two of them are standalone supplements (HMB and HICA)

TOR, or mammalian TOR (mTOR) is a protein complex that serves a pivotal role in regulating cellular signalling. Leucine is able to activate one of the two complexes it makes up, known as mTORc1 (c1 standing for ‘complex one’). When mTOR is mentioned in this article, it is shorthand for mTORc1 unless otherwise specified

Leucine and/or its metabolites appear to increase intracellular calcium, similar to muscle contractions, and the increase in calcium will activate proteins such as mTOR which then induce muscle protein synthesis. Unlike muscle contraction, however, leucine likely does this in all cells rather than localized to skeletal muscle

Hyper(aminoacid)emia is a term used to refer to an excess (hyper-) of amino acids in the blood (-emia), and similar to that hyperleucinemia refers to an excess of leucine in particular. In older men, leucine has been found to increase muscle protein synthesis independent of hyperaminoacidemia suggesting it itself is an independent predictor of muscle protein synthesis.[20]

Sirtuin proteins (SIRT being an acronym for Silent Information Regulator Transcript) are NAD+ dependent enzymes that are sensitive to a cellular NAD+/NADH ratio and thus energy status of a cell.[21] Of these, SIRT1 is a histone deacetylase that can modify signalling of the nuclear proteins p53, NF-κB and FOXO[22][23] and can induce the mitochondrial biogenesis factor PGC-1α.[24] Activation of SIRT1 (the molecule most commonly said to do this is resveratrol) is thought to be a pro-longevity mechanism.

Leucine is thought to underlie the health benefits of dairy proteins on lifespan[25][26] which have independently been shown to promote health and reduce the risk of premature death in rats.[27] Serum taken from patients consuming a dairy-rich diet has been shown in vitro to stimulte SIRT1 activity by 13% (adipose) and 43% (muscle tissue), suggesting biological plausibility.[25]

Both leucine metabolites (α-Ketoisocaproic acid and HMB) are activators of SIRT1 in the range of 30-100%, which is a comparable potency to resveratrol (2-10μM) but requires a higher concentration (0.5mM).[25] Mitochondrial biogenesis has been noted with leucine incubation in both fat and muscle cells, and abolishing SIRT1 attenuates (but does not eliminate) leucine-induced mitochondrial biogenesis.[28]

Leucine metabolites are able to stimulate SIRT1 activity, which is a mechanism thought to underlie mitochondrial biogenesis. It is actually moderately potent at doing so

Leucine appears to initially promote glucose uptake into muscle cells for about 45 minutes, and then cuts itself off which reduces overall effects somewhat. The ‘cut off’ is a negative feedback that normally occurs after mTOR activation. Isoleucine is better than leucine at promoting glucose uptake due to less activation of mTOR

Leucine is known to stimulate insulin secretion from the pancreas, and appears to be the most potent BCAA at doing this. On a equimolar basis (same concentration of the molecule within a cell), leucine is approximately as potent as yohimbine but about two-thirds as potent as glucose itself

Leucine is able to stimulate mTOR activity and its subsequent protein synthesis signalling. Although Akt/PKB positively influences mTOR activity (so when Akt is activated, it activates mTOR) leucine appears to work via a different pathway and activate mTOR without affecting Akt. Regardless, anything that activates mTOR will then activate p70S6K and then promote muscle protein synthesis

Leucine is known to promote muscle protein synthesis at low concentrations in vitro while requiring higher concentrations to attenuate atrophy, despite synthesis rates plateuing.[75] This muscle preserving effect has been noted in disease states characterized by muscular wasting such as cancer[76] as well as sepsis, burns, and trauma.[77] In these scenarios the benefits appear to be dose-dependent.

Hyperaminoacidemia is a term used to refer to an excess (hyper-) of amino acids in the blood (-emia), and similar to that hyperleucinemia refers to an excess of leucine in particular.

In older men, leucine has been found to increase muscle protein synthesis independent of hyperaminoacidemia.[20]

Sarcopenia is characterized by a decrease in skeletal muscle mass protein content and an increase in skeletal muscle fat content that occurs with aging. One of the reasons as to why sarcopenia may occur is due to a decrease in the metabolic response to L-Leucine’s muscle preserving effects that occurs with cellular aging[79]. This effect can be negated in part by the addition of L-Leucine to protein containing foods.[80][81][82]

Resveratrol and leucine both appear to positively influence mitochondrial biogenesis via SIRT1 activation, and they both appear synergistic in doing so when incubated or ingested together

Citrulline may positively mediate leucine’s signalling through mTOR, which theoretically suggests that they are synergistic. The application of the combination towards weight lifters has not yet been investigated, so the synergism is currently just a hypothesis rather than a demonstrated fact

In a small study in 5 healthy men given graded leucine intake up to 1,250mg/kg (25-fold the estimated average requirement) noted that oral doses of 500-1,250 caused increases in serum ammonia and due to this the upper limited was said to be established at 500mg/kg (for a 150lb human, 34g).[93]

How to Squat : Ed Coan

Disclaimer: The entire contents of this website are based upon the opinions of Courtney Stanley, unless otherwise noted. Individual articles are based upon the opinions of the respective author, who retains copyright as marked. The information on this website is not intended to replace a one-on-one relationship with a qualified health care professional and is not intended as medical advice. It is intended as a sharing of knowledge and information from the research and experience of Courtney Stanley and his community. Please make your own health care decisions based upon your research and in partnership with a qualified health care professional. If you are pregnant, nursing, taking medication, or have a medical condition, consult your health care professional before using products based on this content.

Do NOT follow this link or you will be banned from the site!